For many years, TRIANGLE has been investing in innovative development tools to enhance the acoustic quality even further.
In our laboratory, we conduct fundamental research on loudspeakers, their shapes and the materials that make them up. Thanks to the latest simulation software and a high-level anechoic chamber, the loudspeakers are modelled through extensive computer simulations using 3D CAD software to create the ideal profile in conjunction to mechanical and acoustic characteristics of all parts.
Our design, electroacoustics and engineering teams work in close cooperation, the key ingredients for creating exceptional loudspeakers.

TZ2900PM-MG tweeter with a magnesium dome

A major innovation of this 40th anniversary edition, the TZ2900PM tweeter is equipped with a next generation dome in magnesium alloy. Providing a remarkable rigidity to weight ratio, this new dome allows a notable improvement in terms of linearity and consistency.
Superb piece of engineering, the TZ2900 tweeter is one of the keystones of the Magellan program. It brings out all the details of the upper harmonics. Modelled through computer simulation, the dome has an ideal profile that significantly limits off-axis high frequency directivity. Together with the phase plug, this pairing allows the frequency response to be linearized.
We also added a counter-cap to the motor to reduce rear waves reflections, limit distortion and improve the frequency response in the upper end of the sound spectrum. The TZ2900PM-MG tweeter provides an exceptionally smooth and fluid musical quality whilst ensuring accurate sound reproduction. 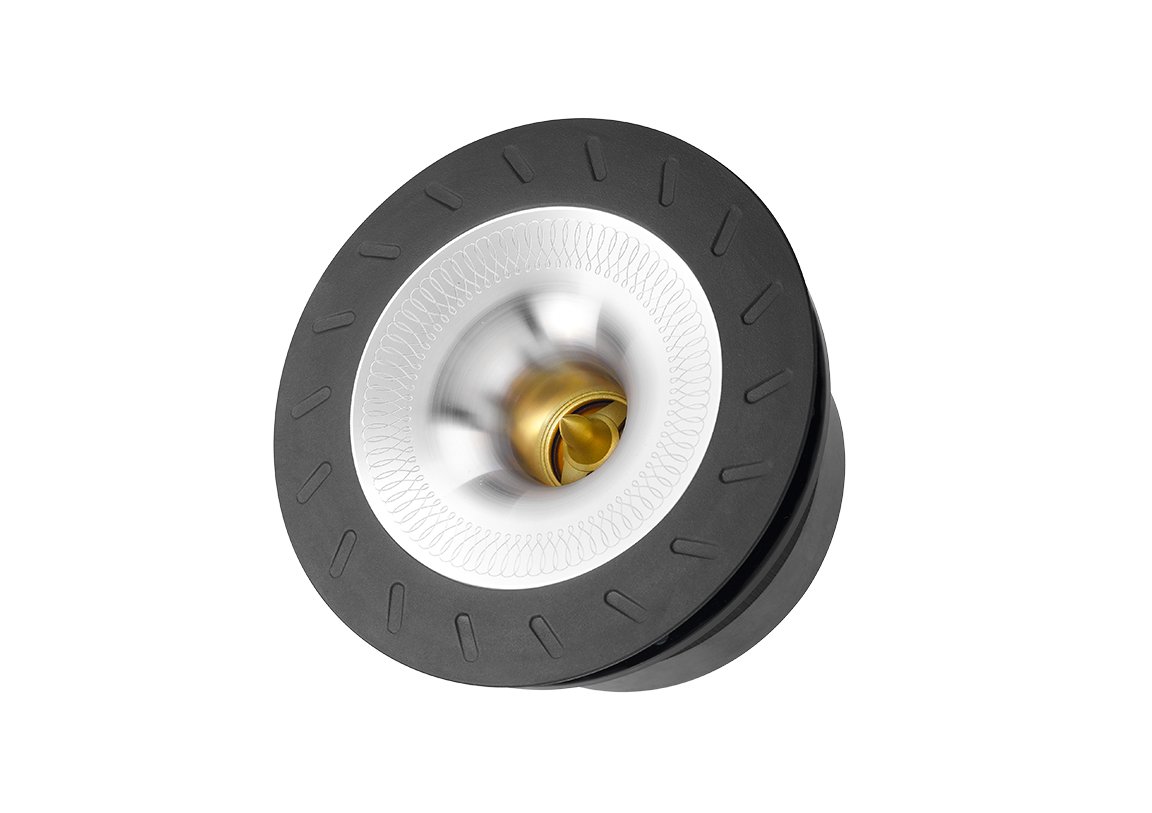 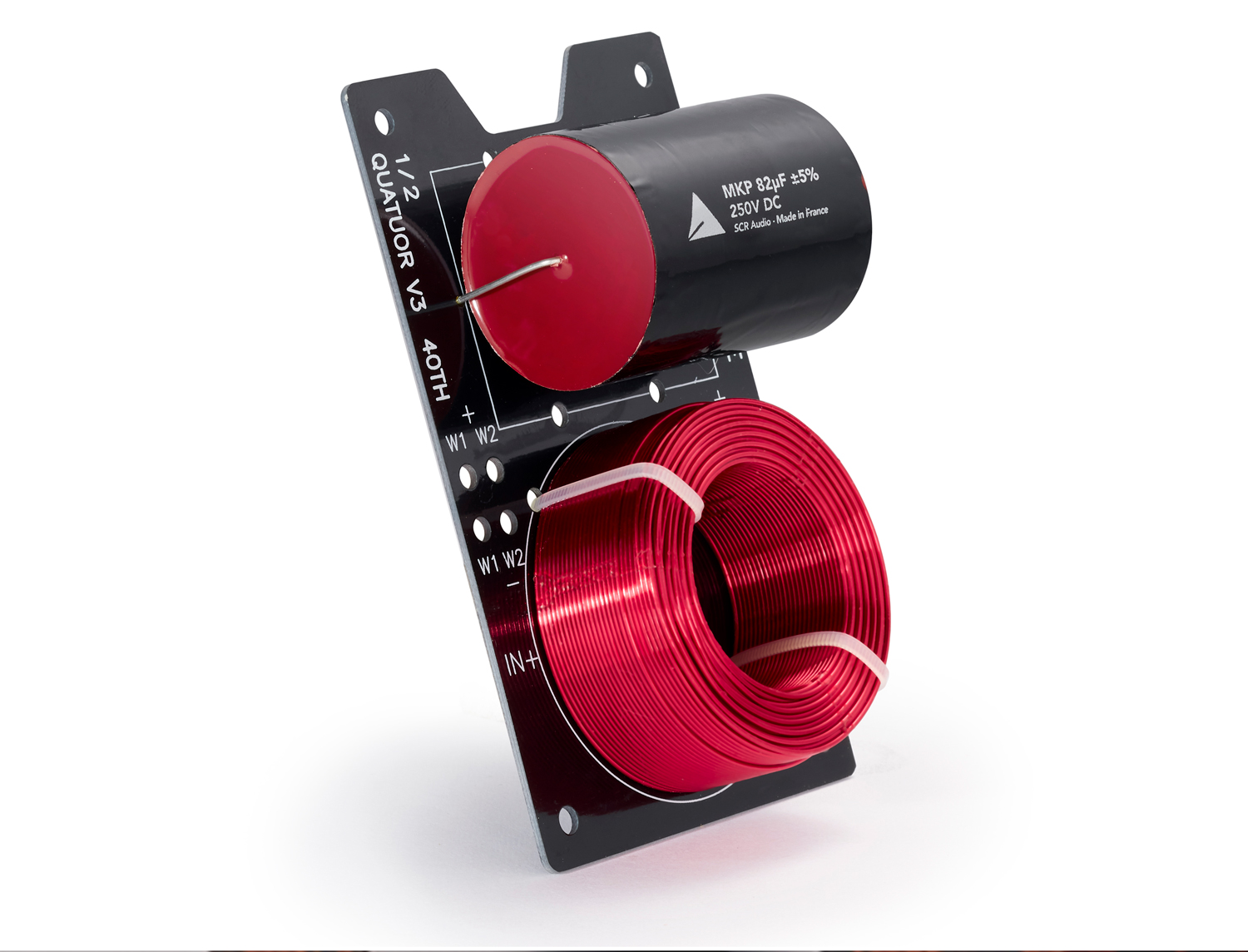 The Magellan 40th crossovers are assembled in our production facility and use only high-quality audio components selected after many hours of listening:
• French MKP capacitors developed in collaboration with SCR Audio.
• Ceramics resistors with low induction effect.
• Large section air core coils.
These new components provide this 40th anniversary edition a very high definition over the entire sound spectrum The particularity of the crossovers in the Magellan range lies in the use of very steep cut-off slopes (up to 24dB/Octave), correlated with the natural cut-off slopes of the loudspeaker’s transducers, thus guaranteeing excellent phase response.
The crossovers used reduce the risk of delays. The loudspeakers’ natural frequency responses were modified digitally for a perfect match with its crossover’s transfer function. Furthermore, the drivers’ impedances were linearized so they act as a pure resistance, reducing the amplifier’s workload.

Striving to obtain the best possible results, the internal wiring of the Magellan 40th is developed in partnership with the prestigious manufacturer AUDIOQUEST.
The selected cable uses a carefully balanced blend of long grain copper (LGC) and high purity perfect surface copper (PSC) which improves clarity. LGC has fewer oxides in the conductor material, fewer impurities, and fewer grain limits than standard OFHC copper.
This new internal wiring gives this 40th Edition an optimal, detailed listening experience with a dynamic but controlled bass. 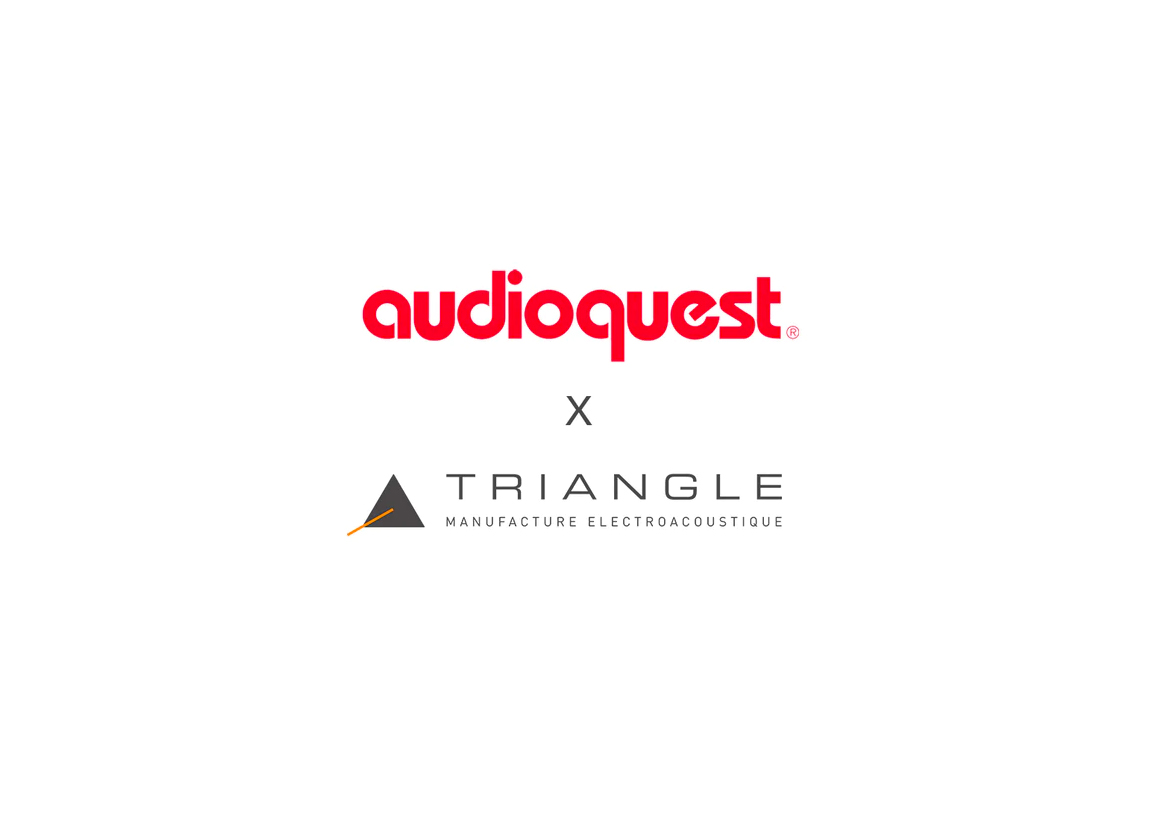 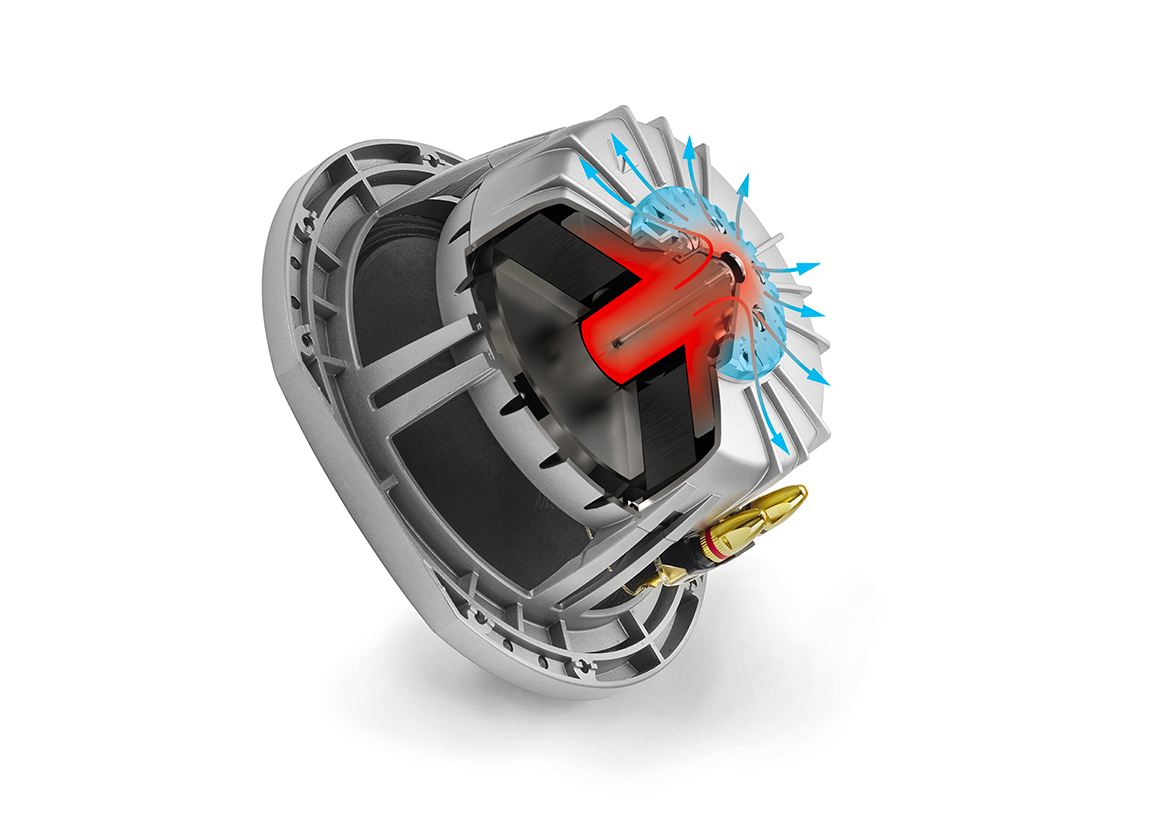 All the drivers in the range have a high rigidity die-cast aluminum basket allowing maximum clearance of the radiating rear surface of the diaphragm.
This basket is in two parts, the rear part acting as a cooling cover. These drivers are equipped with a heat transmission ring to optimize the heat transfer towards the outer cover (LHS2 system). This ring collects heat dissipated from the core and the yoke and brings it towards the outer cover. The power handling capacity for each speaker can thus exceed 200 W RMS. This system prevents the risk of overheating and ensures better speaker performance. As an example, a 20° change is measurable over 120 minutes, with a pink noise registered at 100 watts and filtered with high pass at 80Hz.

The design of the enclosure is crucial to the sound quality, and the cabinets of the MAGELLAN 40th anniversary edition have been carefully designed to ensure full stability.

Made of successive layers of 3mm of HDF (High Density Fiberboard), the sides are molded under tension for several weeks to obtain the desired shape without any compromise in terms of rigidity. The curved cabinet has been chosen for a reason: to limit the standing wave phenomenon by excluding any internal parallels.
The Magellan cabinets feature a specific architecture resulting from a thorough study of the vibrations and micro-deformations of the cabinetry. Measurements were made by laser accelerometers to highlight and model the deformation of the cabinets to place the reinforcements at the optimal places to ensure the best rigidity to the cabinet against the disturbances generated by the drivers. This process allowed to eliminate all the vibrations and to remove any sound coloration linked to the cabinet. 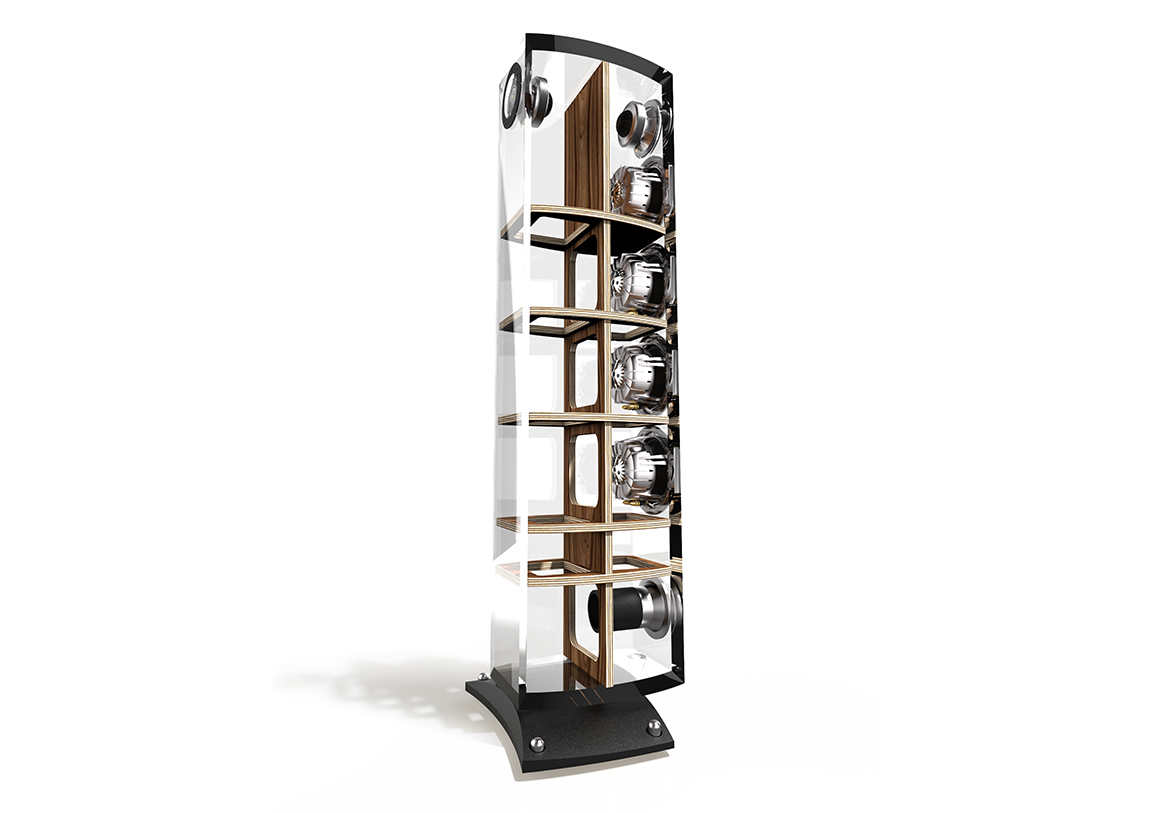 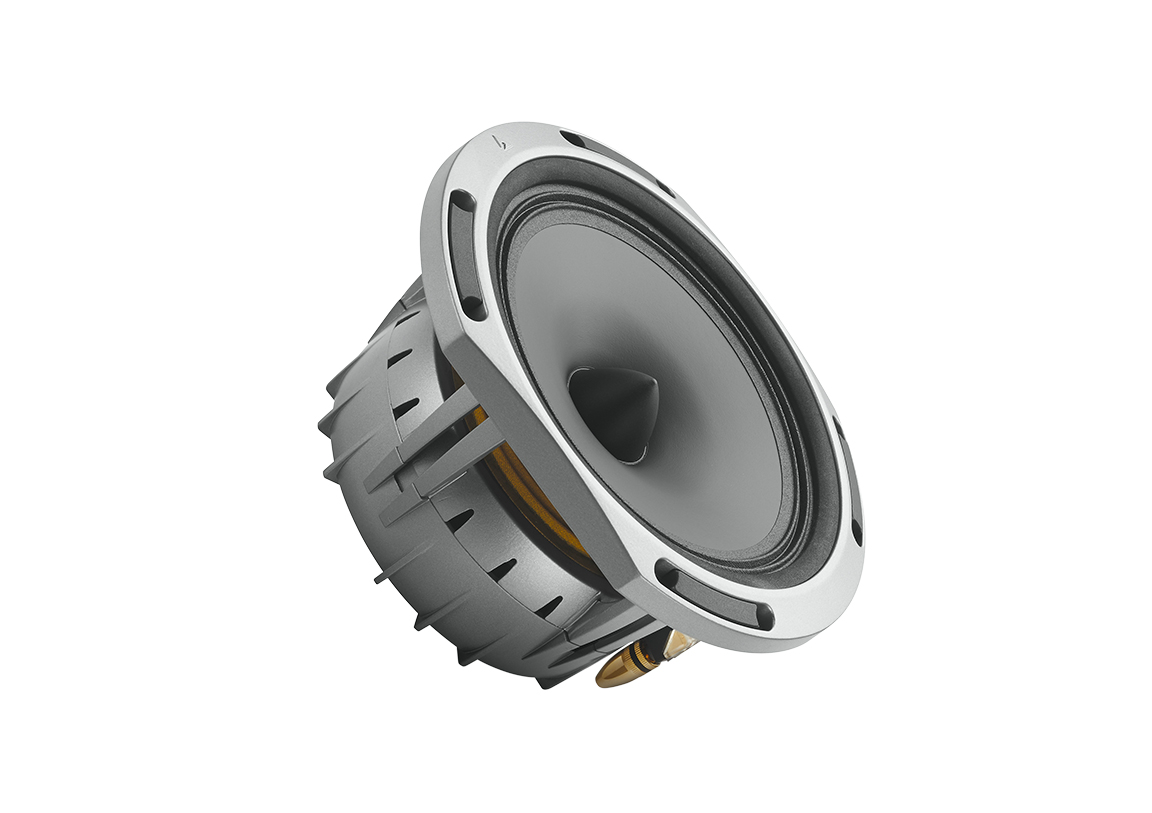 Midrange driver with a paper diaphragm

TRIANGLE has always focused its research on one of the key factors in music reproduction: the accuracy of the midrange. The T16GM F100 represents the culmination of many years of experience and research. This electro-dynamic transducer capable of covering – with the least distortion and the best possible linearity – a frequency band from 70 Hz to 4 kHz.
The research conducted on the T16GM F100 focused on the shape of its suspension, called “S”, made of textile fibers treated with latex, and on the modelling of the profile of the exponential type diaphragm made of pure cellulose fiber. The combination of these two elements ensures an accurate musical reproduction without any coloration.
With an ultra-light anti-vortex polypropylene cone covered with a latex damping material to limit end of band irregularities and a motor resulting from a thorough study of the profile of the tip of the cone and its LHS2 system, the T16GM F100 is a reference in this register.

TRIANGLE aimed to develop a speaker in the extreme low register with a relatively low distortion rate despite high listening levels.
The driver features a proprietary SVA diaphragm. This computer-modeled composite diaphragm is characterized by a ‘sandwich’ structure, composed of a double sheet of fiberglass with a cellulose pulp internal structure. It provides the ideal combination of mass damping and rigidity to the moving coil. The driver thus handles strong impulses without distortion.
The motor, designed to reduce the total overvoltage coefficient, reaches extremely low frequencies. The specific profile of the polar parts combined with the quality of the metals allows the development of a powerful and homogeneous magnetic field, guaranteeing a linear movement of the coil.
The bass driver has a thermal transmitter covering the back of the cylinder head (LHS2). This heat sink allows an optimal heat transmission to the external structure of the driver, thus improving the power handling of the transducer. 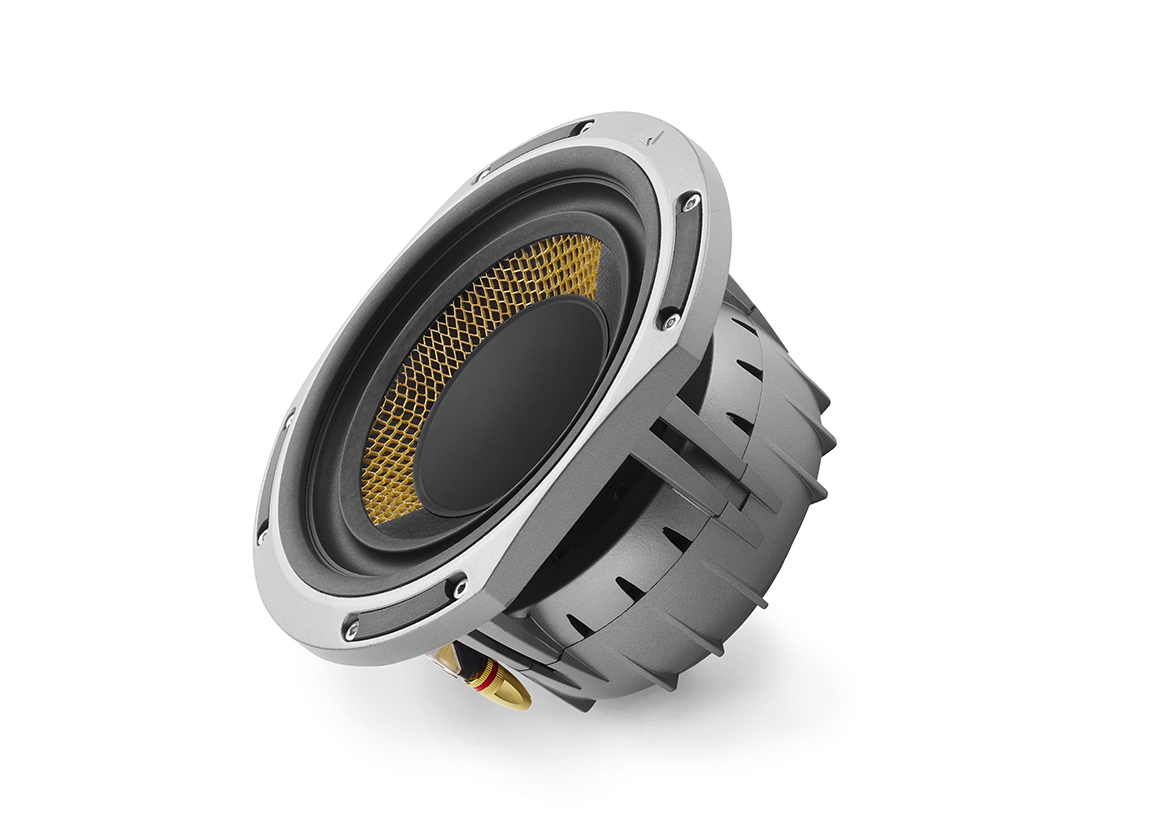 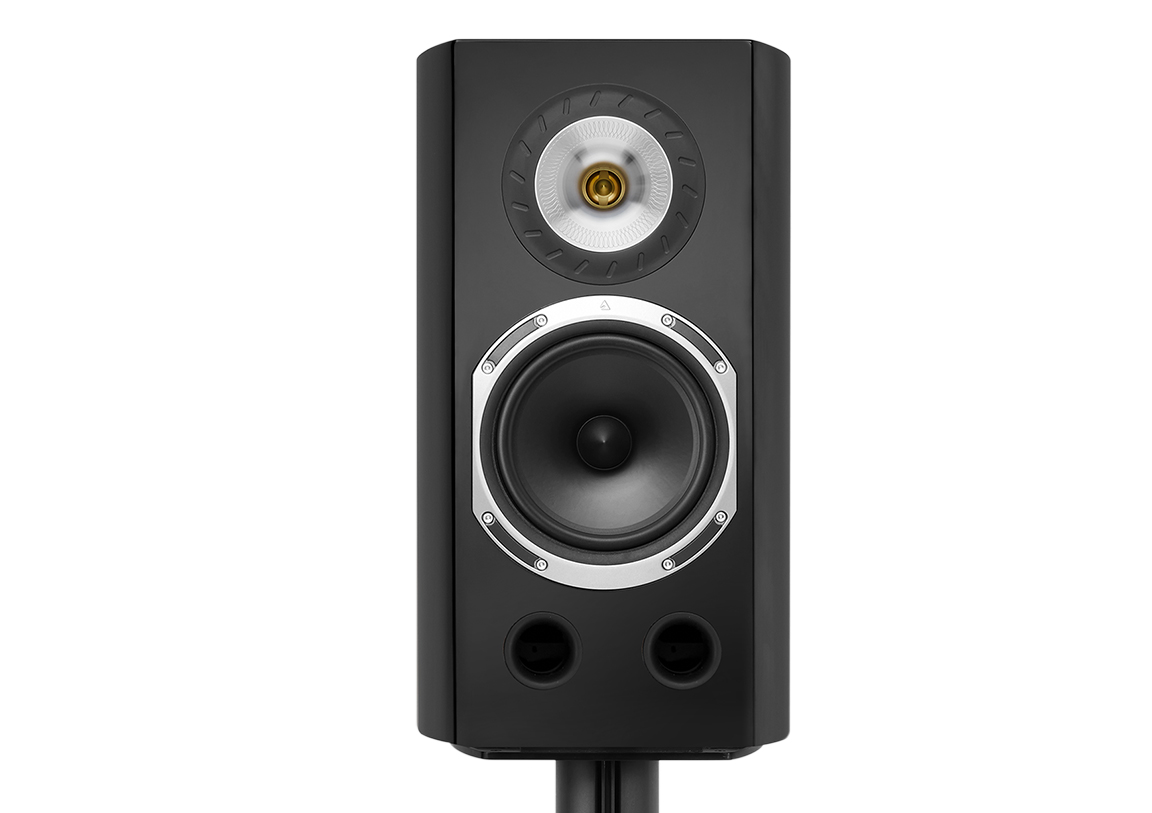 The midrange/bass driver of the Duetto benefits from the latest optimizations.
With a cellulose pulp diaphragm and its “progressive” suspension, it has that rich, natural sound the brand is known for. Thanks to its suspension, there is no clear separation at the cone attachment, resulting in a seamless mid-range. The diaphragm houses an ultra-light anti-vortex polypropylene cone covered with a latex damping material to limit end of band irregularities.
Featuring a powerful motor and a perfectly matched voice coil, this driver is capable of reproducing firm and dynamic low frequencies while maintaining remarkable clarity and finesse in the vocal register.

TRIANGLE was one of the pioneers to address symmetrical bipolar radiation through research on directional patterns (Transept and Zénith II models as early as 1988). To reproduce a sound, it is necessary to know how to apprehend it, analyze it and especially understand how it will be perceived by the human ear. The latest studies conducted on the speaker/crossover association have enabled a significant optimization of this process.
On a typical loudspeaker, the signal emission only comes from the front, so placing it close to a wall will reinforce the level of low frequencies, thus distorting the tonal balance. With the DPS II system, the sound quality of a speaker is improved by reducing its directivity.
On the Quatuor 40th anniversary model, the addition of a rear tweeter that allows the speaker to radiate energy to the front and rear of the transmitting point, much like a symphony orchestra would. This allows for easier placement of the speaker in the room and a stable and deep sound image with great openness without distorting the original signal. 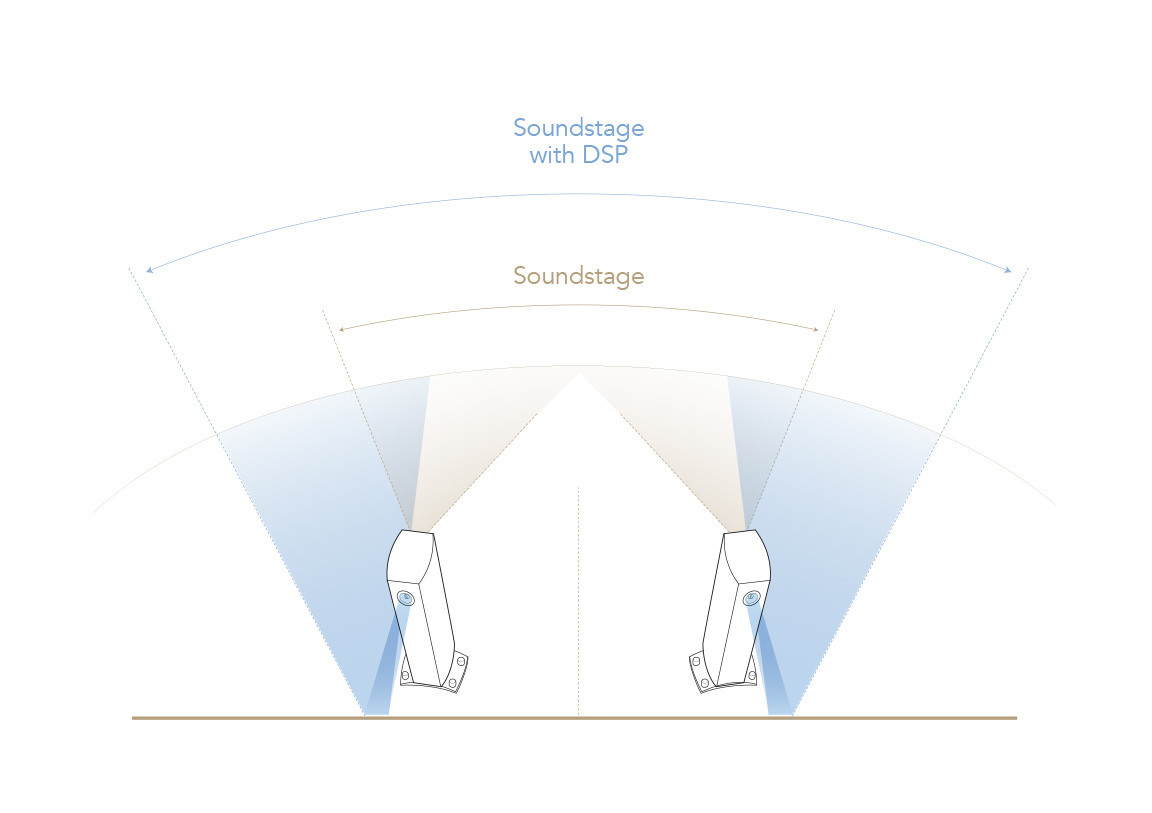 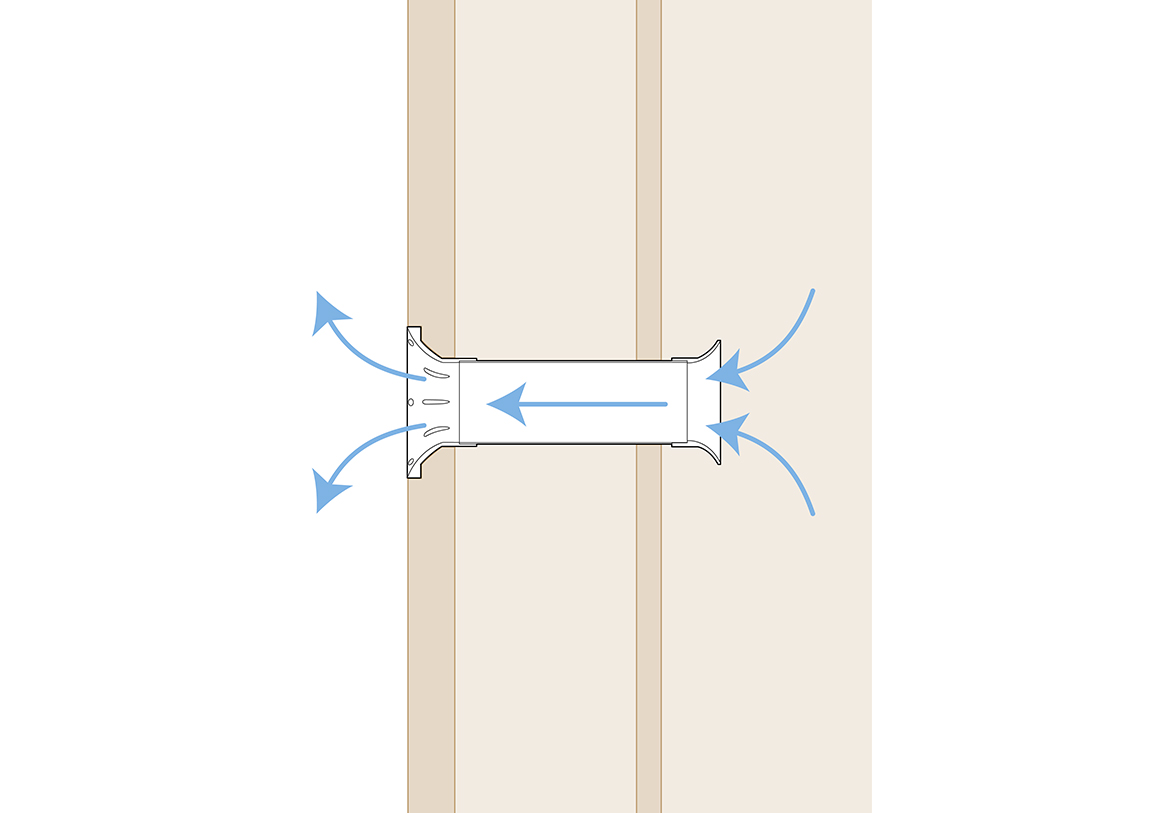 In a bass-reflex speaker, at high power levels, conventional tube vents tend to create airflow disturbances resulting in “breathing” noise. To solve this problem, we designed internal and external bell-shaped adapters inspired by wind tunnel construction to ensure a constant laminar airflow. This controlled ventilation system reduces distortion, and the bass now has depth and power.

The SPEC system developed by TRIANGLE is the result of a research inspired by musical instruments such as the cello. This instrument has a resonance box vibrating at certain frequencies. To give it more support, the manufacturers have decided to connect it to the ground by a single point of connection, a part of the energy is thus directly led towards the ground.
TRIANGLE’s approach for the loudspeaker is the same. So, we decided to put three quarters of the speaker on a base. However, for the system to be highly efficient, it was necessary to insert an interface made of an inert polymer between the base and the cabinet. From then on, we could consider that the enclosure was almost completely isolated mechanically from the floor. We only had to capture a large part of the vibrations of the enclosure and its energy on the remaining front quarter and transfer it directly to the ground. This principle combined with the SPEC system eliminates any transmission to the ground. 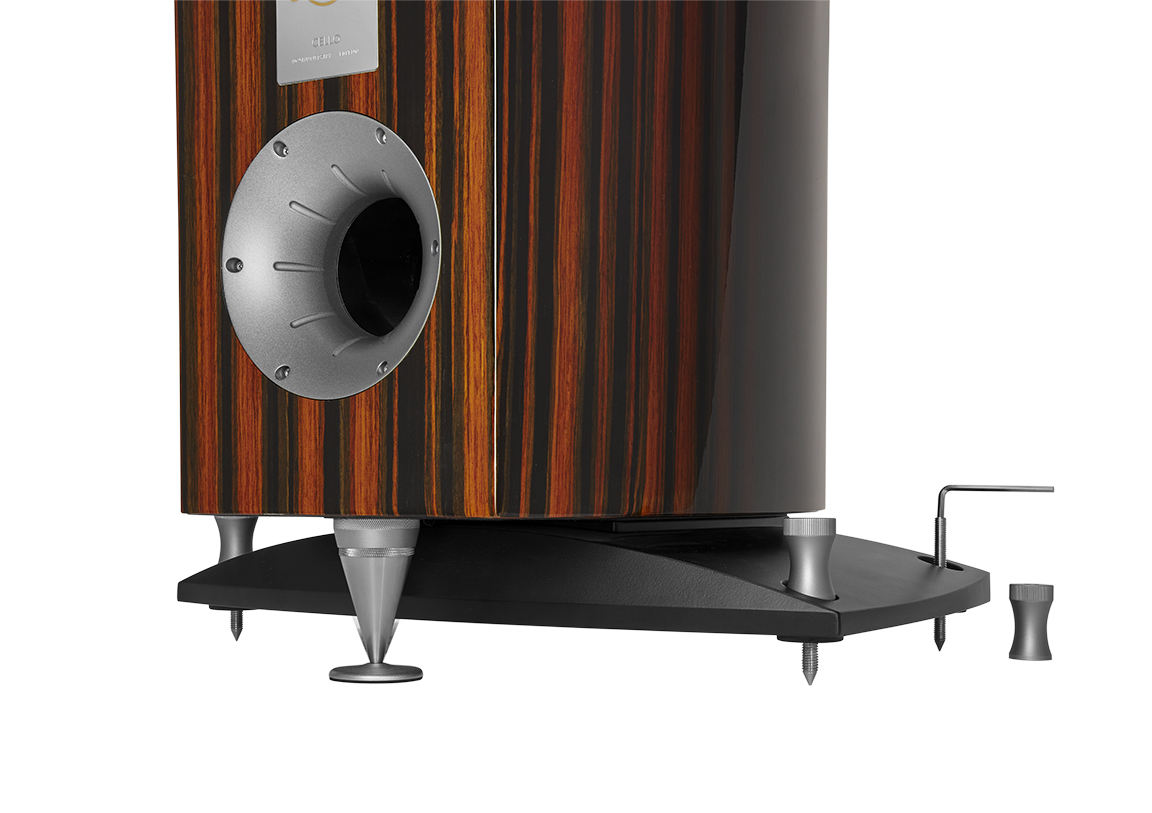 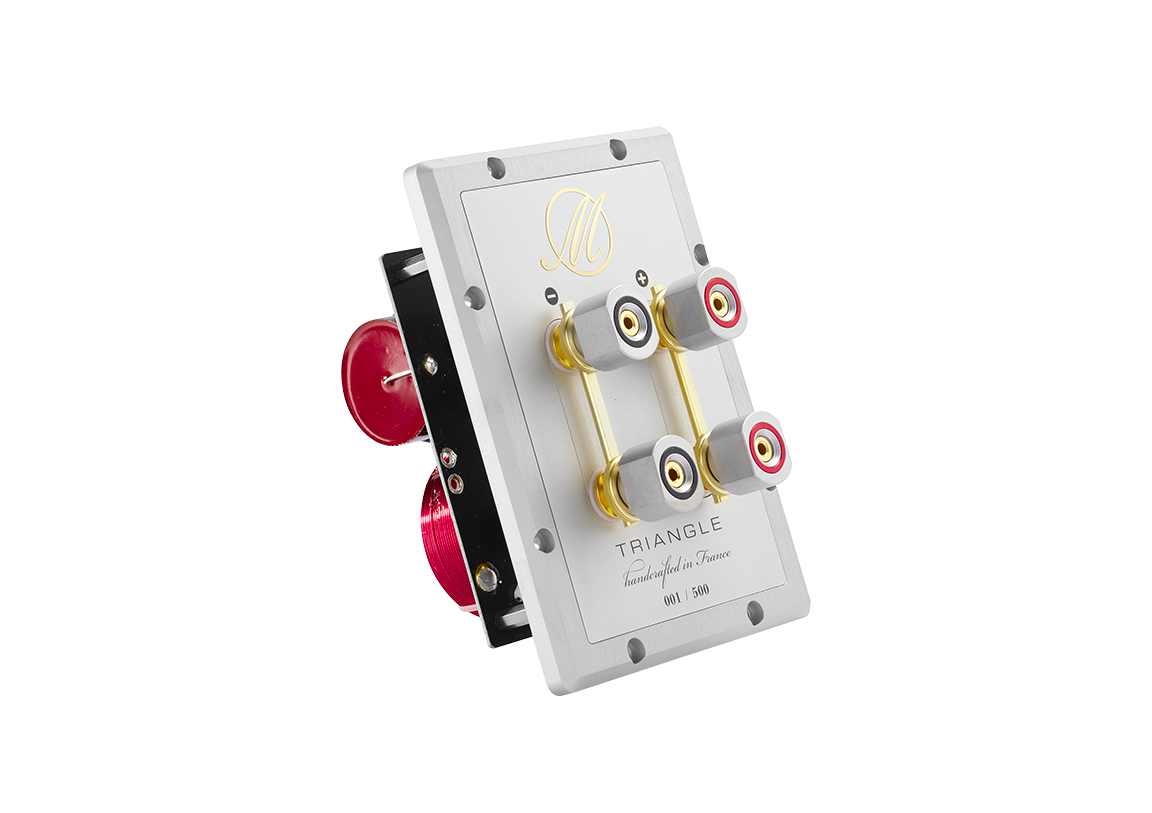 To enhance the crossover of this 40th Edition, TRIANGLE had to offer a connection plate that would live up to the work done.
The terminal is manufactured in a block of aluminum, reaching a thickness of 11mm. The terminals are made of pure copper then gold plated for a perfect electrical conduction. It allows for bi-wiring and bi-amplification. On the floorstander models, the crossover is done on separate boards for the bass and the medium/high. To do this, you just need to remove the jumpers.
Note that the terminals are designed to accommodate a bare audio cable, or a cable mounted with banana plugs or forks.
The serial number on the terminal highlights the exclusive character of this exceptional product. 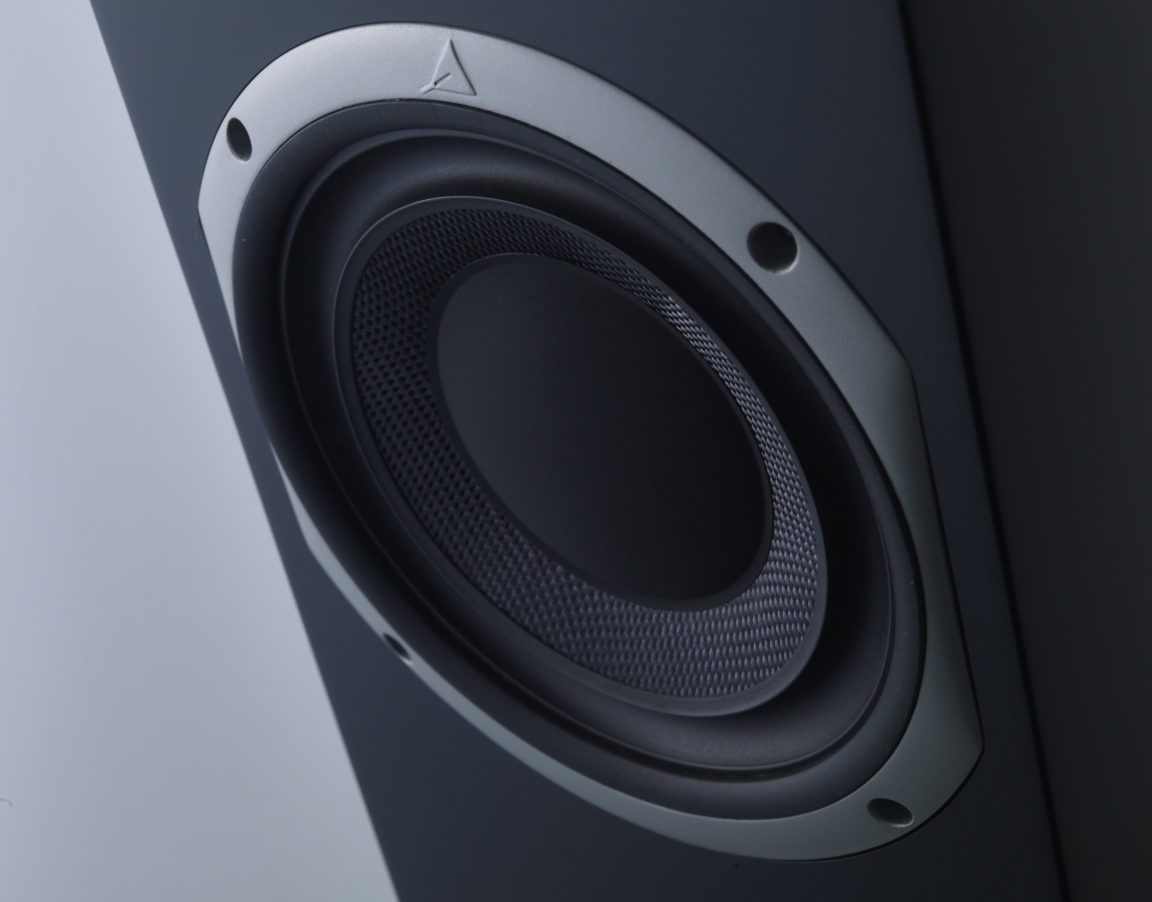 Register your product and benefit from a privileged support. 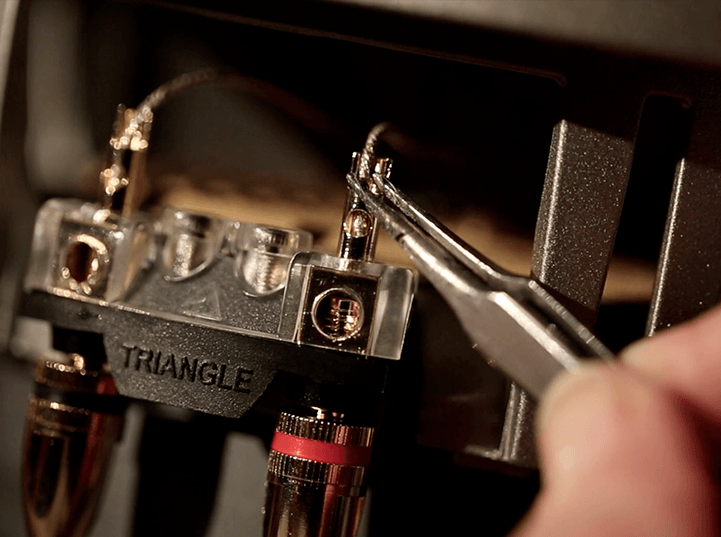 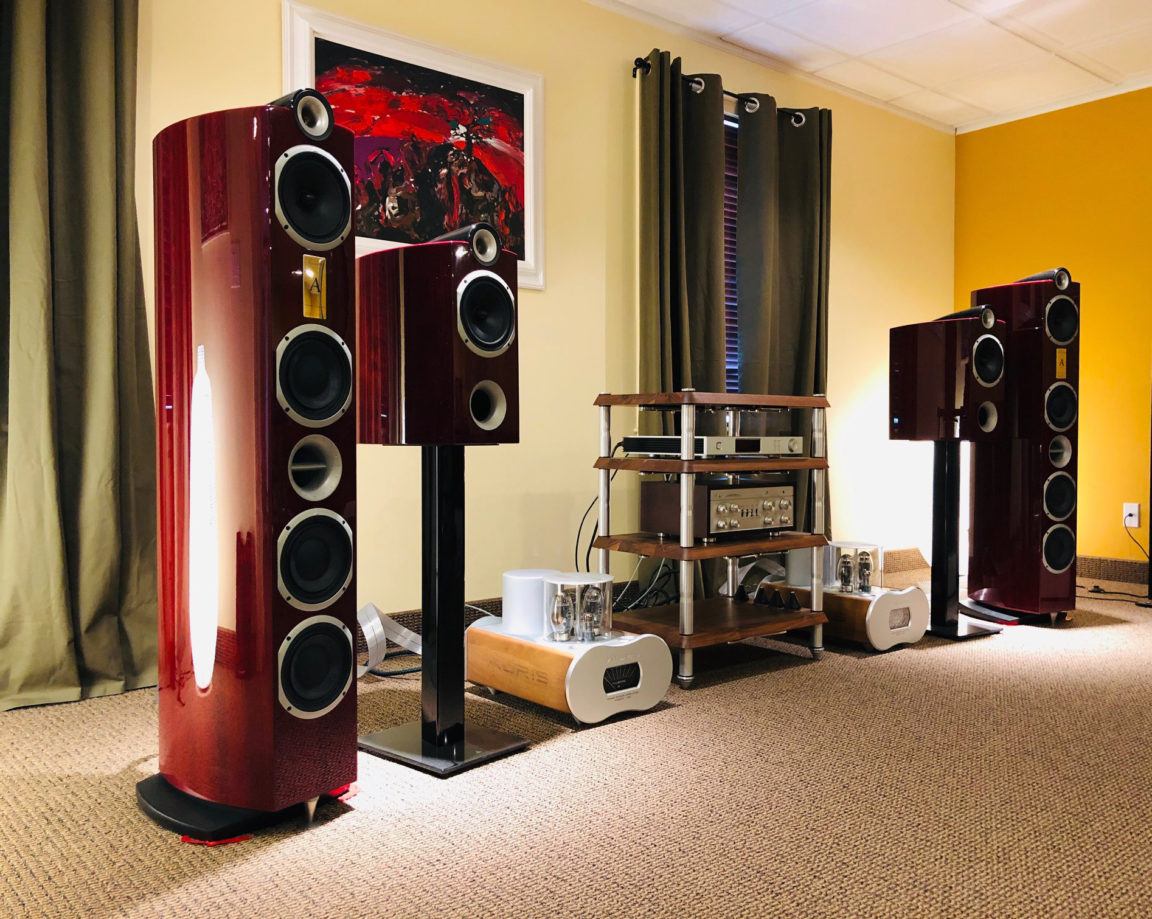 Find a reseller near you or online

Get our last news and exclusive informations about our products

Where can I find my serial number ? 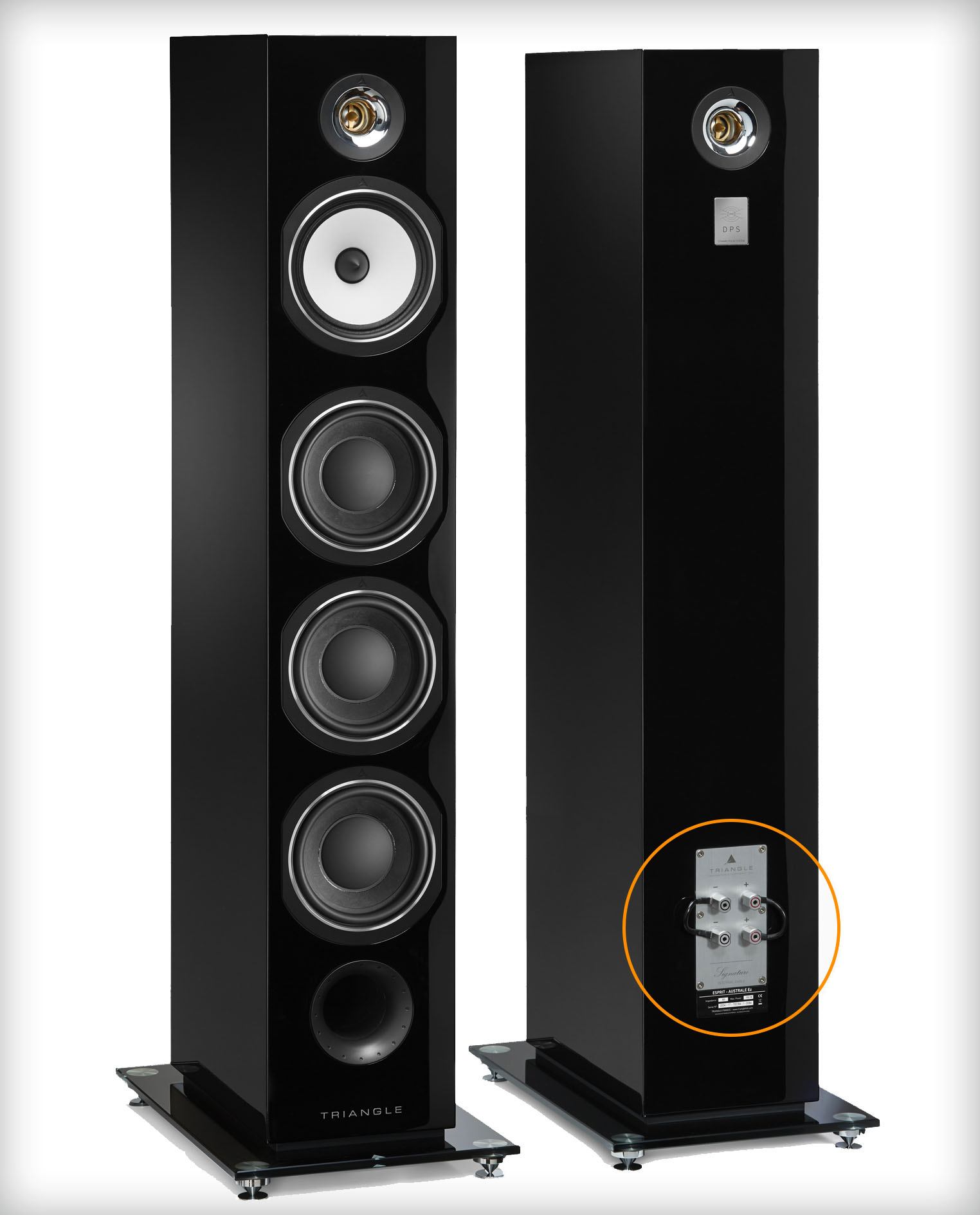 Serial number is at the back of your product. 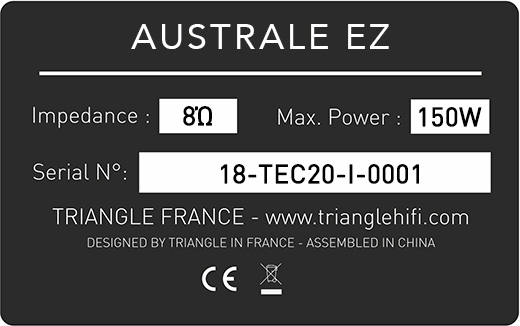